New this summer! Discover library programs and highlights from all over the county with the adult Summer Sampler! The weekly Summer Sampler features booklists, recipes, area attractions to enjoy and lots of other fun activities for the summer. Additionally, the sampler highlights events specifically for adults happening at libraries throughout Allegheny County.

Find copies printed each week in the Reference Department at Sewickley Public Library.

The Summer Sampler is provided by the Allegheny County Library Association and participating libraries.

The Summer Reading Program at the Sewickley Public Library is for more than just kids! Adults can get in on this fun, summer reading challenge, too. Discover Oceans of Possibilities with us as we navigate a summer of fun for all-ages from June 6 – August 6.

The point of summer reading is to enjoy reading for pleasure. You can set your own reading goals for the summer or see what you can accomplish without limits. The summer reading program offers incentives and benchmarks to keep you motivated. Plus, when you log the minutes you read, you earn chances to win awesome prizes! Here’s a breakdown of the treasures we have up for grabs this year: 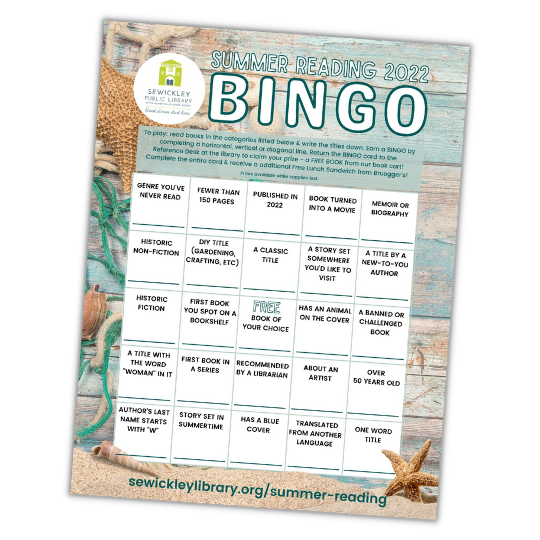 How do you get started? Just sign up! Register for the Summer Reading Program here. If you register by June 6, you’ll be eligible for the early registration prize! Even if you sign up and forget to log daily, or even every week (we get it, life’s busy!) – you’ll still be eligible for the weeks you do log and for the grand prize drawing at the end of the summer.

PLUS – back by popular demand is the 2022 Summer Reading BINGO game! Step out of your comfort zone when you aim to read through the suggested categories to get a BINGO and win a prize. Everyone who earns a bingo will get to pick a free book from our prize cart! Pick up a BINGO card at the library or print one out here.

Nora and her husband, Simon, have run the beautiful oak-beamed book shop in their small British village for thirty years. But times are tough and the shop is under threat of closure–this Christmas season will really decide their fate. When an elderly man visits the store and buys the one book they’ve never been able to sell, saying it’s the perfect gift for his sick grandson, it gives Nora an idea. She and Simon will send out books to those feeling down this Christmas. Maybe they can’t save their bookstore, but at least they’ll have one final chance to lift people’s spirits through the power of reading.

On the night of her high school graduation, Richelle Bach’s father gives her and her identical twin sister, Michelle, matching opal necklaces. “These opals look identical,” he tells them, “but the fire inside each is completely unique–just like the two of you.”

Indeed, the two sisters couldn’t be more different, and their paths diverge as they embark on adulthood. Years pass, until–at their father’s behest–they both come home for Christmas. What happens then forever damages their relationship, and Richelle vows never to see or speak to her sister again. In their father’s last days, he asks Richelle to forgive Michelle, a deathbed promise she never fulfills as her twin is killed in an accident. Now, painfully alone and broken, caring for the sickest of children in a hospital PICU, Richelle has one last dream: to be an author.

When newly-divorced Ivy Perkins buys an old farmhouse sight unseen, she is definitely looking for a change in her life. The Four Roses, as the farmhouse is called, is a labor of love–but Ivy didn’t bargain on just how much labor. The previous family left so much furniture and so much junk, that it’s a full-time job sorting through all of it.

At the top of a closet, Ivy finds an old Santa suit–beautifully made and decades old. In the pocket of a suit she finds a note written in a childish hand: it’s from a little girl who has one Christmas wish, and that is for her father to return home from the war. This discovery sets Ivy off on a mission. Who wrote the note? Did the man ever come home? What mysteries did the Rose family hold?

At Ridgewood High, Amy, Frankie, Rachael, and Nina formed a deep bond. Now, fifteen years after leaving school behind, they’re back for a reunion, laughing, reminiscing, and chatting how much has changed-and how much hasn’t. Nina, once the star of every school play, moved to Hollywood and landed a recurring role on a sitcom. Amy, fondly known as “the brains of the operation,” is now a Silicon Valley bioengineer. Outgoing and compassionate, Frankie works for a New York publishing house. Rachael, always the most boy-crazy of the crew, married-mostly to please her parents-but is now divorced. All four are strong, successful, and somehow, still looking for the right partner. But Frankie has an idea to help solve that- a singles cruise for the holidays.

In the newest installment of New York Times bestselling author Kristy Woodson Harvey’​s Peachtree Bluff series, three generations of the Murphy women must come together when a hurricane threatens to destroy their hometown–and the holiday season in the process.

An Eggnog to Die For / Amy Pershing

Professional foodie Samantha Barnes has a simple Christmas list: a quiet holiday at home with her dog and a handsome harbour master; no embarrassing viral videos; and no finding dead bodies. Unfortunately she’s just stumbled over the lifeless body of the town’s Santa Claus Sam finds herself once again in the role of sleuth. She needs to find out who slayed this Santa – but can she pull off a perfect Christmas feast and nab a killer?

Christmas has come early to the town of Paterson, New Jersey, in the form of a snowstorm that dumps two feet of snow on the ground. Lawyer Andy Carpenter likes snow – white Christmas and all that – but it can cause problems for the walks he takes his dogs on every day. When Andy’s golden retriever, Tara, goes to play in the snow and instead discovers a body, Andy ends up on the phone with the local newspaper editor. The murder victim is Mayor Alex Oliva, who had an infamous relationship with the newspaper. Last year a young reporter published an expose, and Oliva had him fired for libel. Now, the young reporter – and prime suspect – is in need of a lawyer. Andy agrees to take the case, though it’s not looking good this holiday season.

The cast of Donna Andrews’ New York Times bestselling Meg Langslow mystery series is back for an unforgettable holiday story in The Twelve Jays of Christmas.  This intrigue-filled Christmas mystery takes readers home to Caerphilly to join in Meg’s family’s holiday celebration–including, of course, another baffling mystery.

Lindy Carmichael isn’t feeling particularly joyful when she returns home to Wenatchee, Washington, for Christmas. The man she thought was “the one” has cheated on her with her best friend, and she feels completely devoid of creativity in her graphic-design job. Not even carolers or Christmas cookies can cheer her up–but Lindy’s mother, Ellen, remembers an old tradition that might lift her daughter’s spirits.

Mistletoe, Maine, is buzzing and not just because Christmas is around the corner! Dante West, local cutie-turned-Hollywood hunk, is returning home to make his next movie. Everyone in town is excited . . . except librarian Lucy Marshall. When Dante took off for LA without warning–or even a goodbye–he broke Lucy’s heart. She swore not to spend one more minute thinking about her ex, but Dante makes an offer Lucy’s struggling library can’t refuse: a major donation to film on-site.

Tis the season–for everyone except Emmy Garrett. She’s on the run after witnessing a crime. But when it becomes clear that trouble will continue following her, the US Marshal in charge takes her somewhere no one will think to look-Montana. Not only is Emmy in a new place for her protection, but now, she’s stuck with a handsome cowboy as her bodyguard…and she wants to do more than kiss him under the mistletoe.

The 2021 Adult Summer Reading Program has finally come to a close. As we reflect on this past summer of logging, one thing is very clear: we have some seriously dedicated readers in this community! Give yourselves a round of applause 👏👏👏

We had 176 adults participate in this year’s program and together they logged over 236,800 minutes! That’s just shy of 4,000 hours of reading. In that many hours, you could drive back and forth from Sewickley, PA to Los Angeles, CA 100 times and still have hundreds of hours to spare.  Our point is, that’s a lot of time spent reading and we think it should be commended! So we’re going to highlight the weekly winners and top readers from this year’s Adult Summer Reading Program.

Congratulations to all our winners & our readers! We hope you enjoyed participating in the Summer Reading Program. To learn more about what’s happening at Sewickley Public Library, check out our Event Calendar and/or sign up for our Weekly Emails!

The Pennsylvania Department of Banking and Securities is hosting a series of weekly webinars this February called Midweek Money Market. This free webinar series on investing and retirement planning covers a variety of topics, including: Saving for Investing, How Much Do I NEED to Retire, Making Your Retirement Last in Your Golden Years, and Protecting Your Retirement from Fraud.

The February schedule is below. Registration is required. Click on the date for the link to register for this free program. END_OF_DOCUMENT_TOKEN_TO_BE_REPLACED

Ah, summer. Whether you’re working on your tan or catching some Z’s, a good book is always a great addition to throw into your beach bag. If you’re looking for something to read as you lounge on the sand, here are some great choices! And if you’re stuck at home this summer, worry not! These books also do well on solid ground!

Make sure you sign up for our Summer Reading Program, which runs from June 10 to August 10, for a chance to win some amazing prizes!

END_OF_DOCUMENT_TOKEN_TO_BE_REPLACED

Whether you’re an amateur collector of antiques or the proud owner of an old family heirloom, the restoration and preservation of antique items can quickly get confusing and overwhelming. If you’re looking to preserve family heirlooms or other types of antiques, here is some helpful information about the process, including a list of preservation resources in the area generously provided by the Conservation Technicians at the Carnegie Library of Pittsburgh!

END_OF_DOCUMENT_TOKEN_TO_BE_REPLACED

With the winter season now in full swing, the excitement and beauty of snow tends to be overshadowed by the less attractive parts of winter: it’s cold, it’s dark, and most time is spent indoors. If you find that you’re struggling to feel like yourself this season, you’re not alone. Studies show that over 20% of the population deals with varying forms of the winter blues¹.

Here are some great books to help get you out of a seasonal funk, bring back your confidence, or maybe just put a smile on your face.

END_OF_DOCUMENT_TOKEN_TO_BE_REPLACED

If you’re looking for some tunes to put you in the holiday spirit and want some new renditions to spice up your playlists, here are some of the many festive CD’s we have available at the library! Ask your reference librarian where to find these hidden gems!